Weddings are romantic enough to melt even the hardest of hearts-we cry at weddings because we are so overwhelmed with emotion. This story is probably not the first wedding story that you have heard, but one that needs to be shared anyway. This is a story about a man who snooped around his girlfriends Pinterest account to find out details about her dream engagement and wedding. 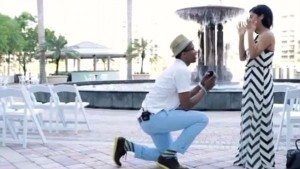 Amanda Roman was just like any other woman who dreams about the perfect wedding and like many others pinned and researched and planned her dream wedding which she had put up on her Pinterest page. What she did not know was that her boyfriend was one of the people who were interested in what she was doing on her account.

Ryan Leak was actually paying attention because he was looking for clues on what the woman of his dreams was wishing for when it came to her ideal engagement. She had mentioned to her friend via Pinterest how nice it would be if she got engaged and wedded in a single day. Leak had overheard what she had to say and taking advantage of having access to her account soon got to planning on the best way to ask Roman to marry him. 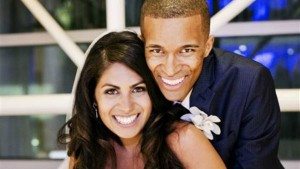 So the Dallas couple went on a vacation to Miami on June 7th and unknown to Roman her wedding venue and reception as well. As soon as they had arrived at their destination, Leak then asked her for her hand in marriage and placed a ring on her finger, he then escorted her to a lounge which was filled with over a hundred of her friends and family members who were holding a giant sign which had the word –“today?” written on it.

In fact her unusual surprise wedding was covered by the local WWFA news station, to which she had said that she felt very much loved and felt like it was  cloud nine experience. She felt as though she was part of a fairy tale and a dream come true.

The wedding was the end result of Leak’s plans to give his future wife the wedding of her dreams- he started planning this special event by paying attention to what she was adding to her wedding page on Pinterest and had overheard her telling a friend about an engagement and a wedding that would take place on the same day.