Even though the white wedding dress has become the most in vogue bridal dress in the world; many brides prefer to wear traditional wedding dresses culture when they tie the knot as a cultural significance. From the vibrant kimonos of the Japanese bride to the heavily beaded attire of the African brides, the colors of the bridal attire are as diverse as the cultures that these women belong to.

In Christian ceremonies, the bride seldom changes the traditional white wedding gown. However, in other cultures, the bride may have to change as many as four costumes during the day. In some cultures, the wedding ceremonies can even go on for more than a week. Nevertheless, the one thing that holds significance is the traditional wedding gown of each culture. Here is a list of some of the most exotic and colorful traditional wedding dresses from around the globe. 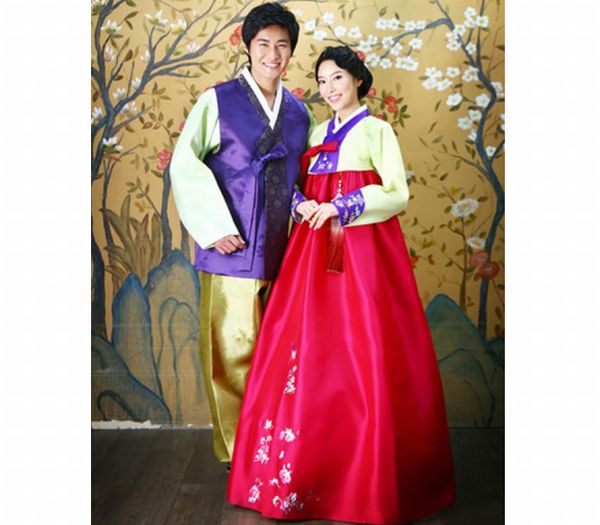 Simple lines and vibrate colors are some of the characteristics of the Hanbok; and is a traditional Korean wedding attire. This wedding attire comprises of a high-waist skirt AKA Chima along with a jacket or a Jeogori; along with that, the bride completes her look with some traditional jewelry. This traditional wedding dress comes in bright and vibrant shades of colors like red, yellow and blue, which are part of the bridal ensemble. 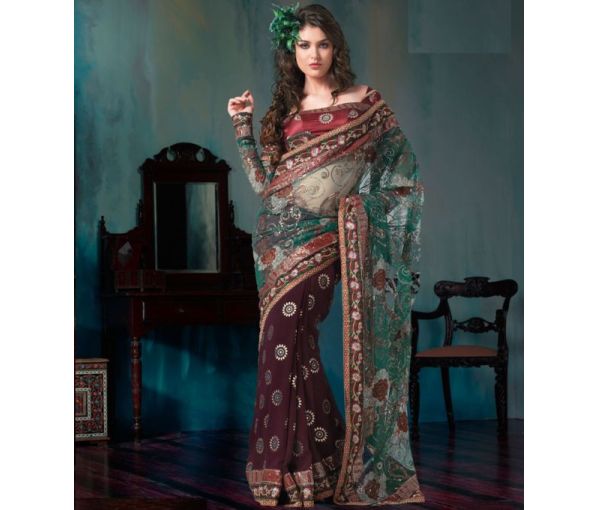 The sari or saree is one of the traditional wedding dresses for women around the subcontinent. Although the three piece outfit remains the same; however, the draping of the saree, fabric, colors, prints and even embroidery differs from region to region. The color of the wedding gown differs on the basis of the cultural significance.

For example, in Hindus, red is an auspicious color while Muslims and in some Hindu cultures like the Maharastrians prefer green. Some regions consider yellow as an auspicious color. In the Indian culture, some other traditional wedding dresses will also include the Christian wedding gown, the Sharara and even the lehnga choli ( a long flarry skirt with a short blouse)

While some brides use the loose end of the sari as a veil; in many parts of the regions, you will find the bride wearing an additional veil which will have heavy gold embroidery on it. The sari is paired with a blouse which can be either short or long; depending on the specific culture the bride wearing it belongs to. 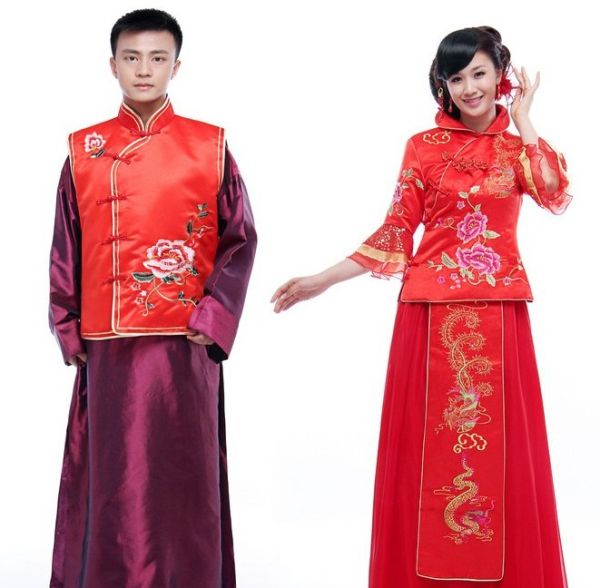 The traditional two-piece wedding dress worn by brides in China is called a Qun Kwa. To symbolize happiness and luck for the auspicious occasion; the dress comes in a striking red fabric with colorful thread, beads and embroidery. Comprising of a loose jacket and skirt; the Qun Kwa is embellished with an embroidered phoenix (symbolic of the female) and a dragon (symbolic of the male) at the front to symbolize the harmony between the yin and yang energies. 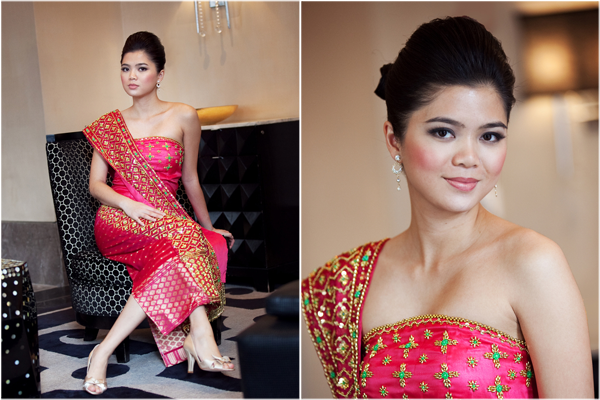 The traditional Cambodian wedding dress compirses of a two-piece ensemble. A long sarong-like skirt AKA Kahen; is paired with a form fitting strapless blouse and a heavily embroidered Sbaay sash. The traditional Cambodian wedding dress does not require the bride to wear an elaborate headgear or a veil. Although the dress is almost always very heavily embroidered and embellished with jewels and sequins. The Kahen and Sash are generally made in shades of red though. Neverthless, Cambodin ctultures also accept other vibrant colors as a part of the traditional wedding dresses of the region. Wearing black at a weeding is strictly forbidden. 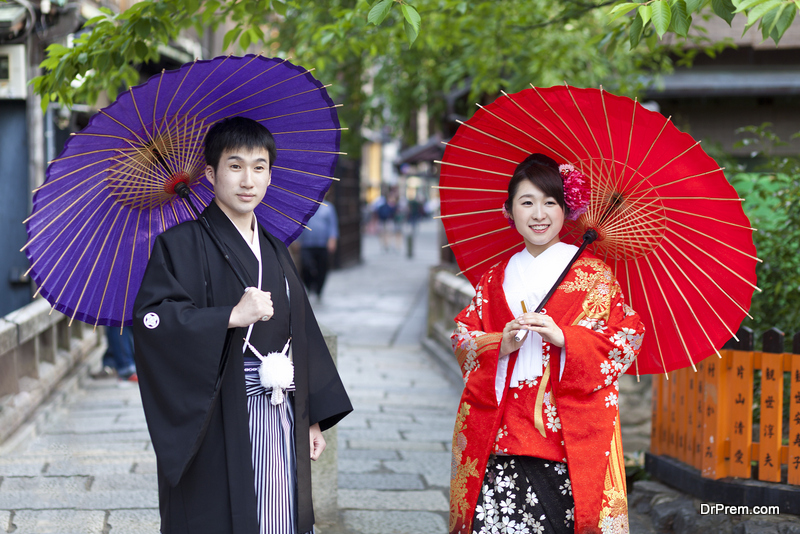 The Kimono is a traditional Japanese garment that is worn by both men and women at a traditional wedding. With long sleeves, attached collars and a straight ankle-length hem; the Kimono is secured by a wide sash called an obi. This is generally made a color contrasting the color of the kimono itself. The traditional bridal kimono comes in a bright crimson color. However, most modern brides tend to go for a white version of the traditional garb as well. 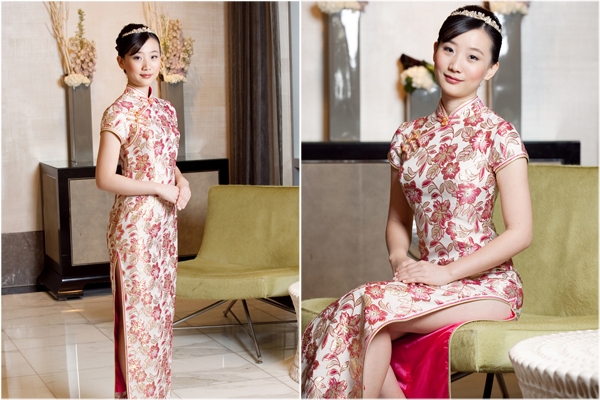 The Qi Pao or cheongsam  AKA Mandarin gown in English, came into being in the 1920s; and is fashionable version of traditional Chinese attire. Although many people do not consider the body-hugging one-piece dress to be traditional Chinese bridal wear; nevertheless, it is a popular choice in wedding wear for the fashionable upper-class women and socialites. In the Chinese culture, the colored Red is auspicious; this is why, most bridal Qi Pao dresses come in red. To give it an even richer look; you will find different kinds of embellishments and traditional Chinese embroidery throughout the length of the dress. 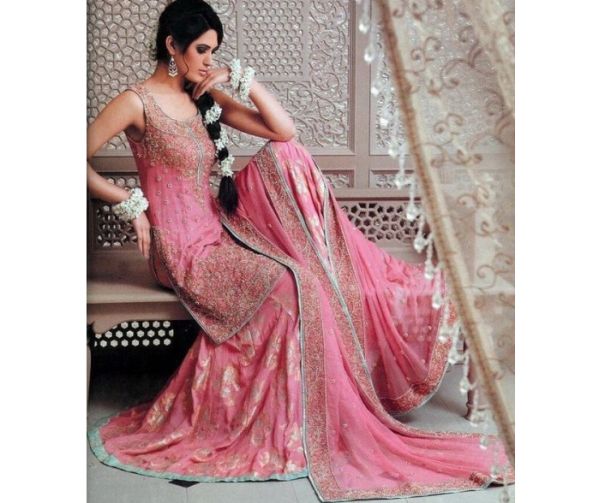 The Sharara or the gharara first came into being under the rule of Indian Muslim Nawabs. This two-piece outfit has been popular among Muslim brides throughout the subcontinent ever since. Pakistani bridal fashion has seen a revival of the garment in recent years and continues to flourish. The outfit comprises of a pair of flarry wide trousers that ruch at the knee and a mid length tunic. Along with that, the bride also wears a veil that is heavy with zardozi or zari work or embroidery. In keeping with traditions of the subcontinent; you will find the bridal Sharara mostly in shades or red or a striking green. 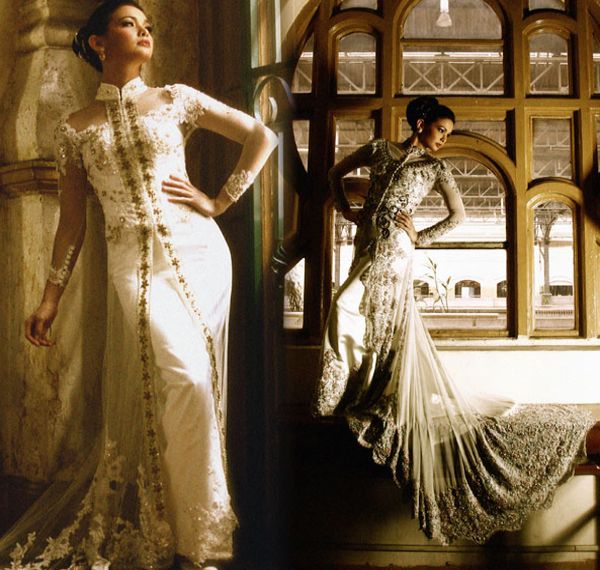 Worn by women in Indonesia, Malaysia, southern Thailand, Brunei, Singapore and Burma; the Kebaya is a traditional dress-blouse combination that the bride wears; and is also a part of the bridal attire. this bridal attire consist of The lower half of the dress also known as a batik kain panjang or sarong; along with a form fitting blouse. Modern interpretations of the dress retain the closed mandarin collar silhouette of the traditional outfit; and a single piece floor length dress forms the base of the attire. The dress, both in two-piece and one-piece avatars; you will also find this traditional dress in different vibrant colors though shades of white are also acceptable. 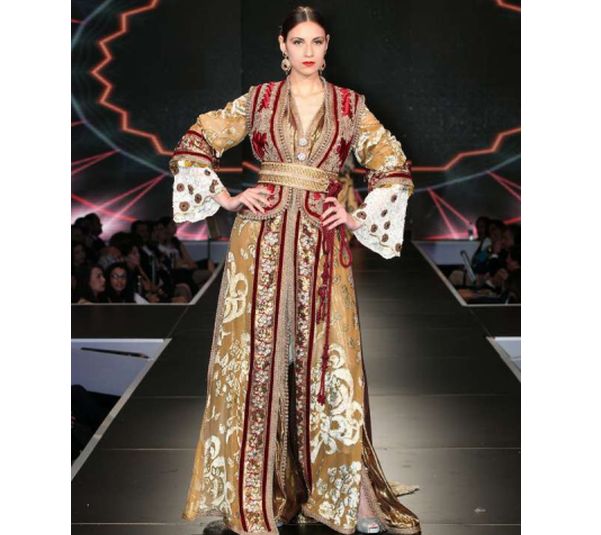 A variety of the traditional Moroccan caftan. The Takchita is a traditional women’s garment in Morocco; and is part of the bridal attire. Using the traditional sfifa and akaad closures; an over-dress often buttons up the front. The more elaborate second layer of ornately decorated fabric sits over a fine first layer of the two piece dress. Sequins, beading and embroidery adorn the rich second layer. During the wedding ceremony, the bride and groom will also wear elaborate headgear. 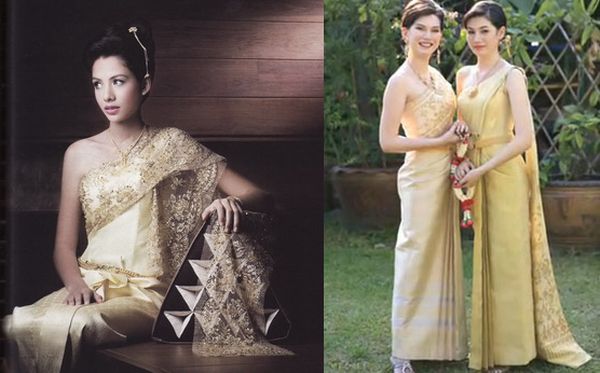 During a wedding ceremony; Thai brides don’t wear a standard outfit, since the majority of the country’s population boasts of mixed ethnicities. However, a traditional wedding dress for a Thai bride; comprises of a silk ensemble of brightly colored, close-fitting, traditional pieces inspired by various cultural influences. A full length wrap-around skirt called a “Pha sin” is one of the staples in the outfit; this also has two pleated folds in the front called “na nang”. A choice of shawls worn over the shoulder finish the outfit. These shawls are encrusted with semiprecious stones and is generally found in bright colors.