Carolina Herrera’s bridal collection is replete with variety gowns and wedding dresses galore. Released as an improvement over last year’s Spring collection, it has been jam-packed with innovative designs and fashion. Though they are ‘just improvements’, this cannot be considered as old wine being packed into a new bottle because the collection seems to unleash a whole new feel! Each dress seems to ‘spring’ to life and blossom on the bride. 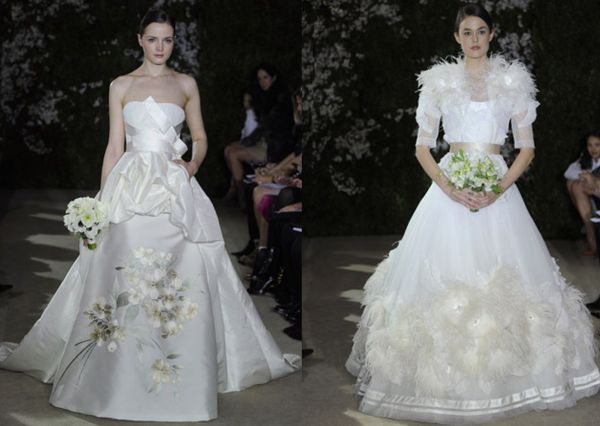 Carolina Herrera was born as a Venezuelan who later naturalized into an American entrepreneur and fashion designer. She founded her own eponymous company in 1980 and has seen a meteoric rise into fashion designing fame ever since. With the Geoffrey Beene Lifetime Achievement Award and several other awards under her belt, she has established six boutiques in the world.

Carolina Herrera has always derived great pleasure in the fantasy and romance involved in designing a bridal collection. And she wants to design the collection with variety of dresses to encompass as many personalities as possible. The women who wear her dresses for inspiration are her inspiration as she adds delicate flourishes to the relaxed chics and endears herself to brides around the world. Her idea is to design bridal dresses that pay homage to the brides.

As a woman who believes in the personality of the brides as much as she believes in her own, Carolina’s designs reflect myriad personalities and distinctly different designs. They have been made to suit a relaxed ceremony on the beach as well as a traditional one in the church. The striking feature of all these elegant and pearly white gowns is that they are strapless. Though each gown is unique, based on some structural similarities, the different gowns could all be grouped into segments. Without further ado, let us dive into the magic and wonder of the bridal dresses in the collection.

The ‘classic’ segment is constituted by floor-length gowns. One such ball gown is ultra modern in its sparkling white appearance. A coat accent is available that could be used for some broad uppers. The coat is, however, a must-use in the classic ivory ball gown which is also strapless. A variant of that is the classic preppy ivory bateau which arrives along with a choice between the coat or the jacket. A broad bow in the center accents the frame.

The ‘romantic’ segment opens with ruffles ball gown which is preppy white and floor-length. The multi-layered wedding gown creates the illusion of a princess descended from the heavens themselves! The next dress in the ‘romantic’ segment has been inspired by the legendary mermaids. It balloons and hugs the body in such a manner that the bride appears like a sweetheart mermaid. The crowning glory among the romantic gowns is the one with a Swarovski crystal beading sheath. It is simple in its shape but intricate in the designs on it. Talking of designs, another entrant in this segment has sash ribbons flourishing at the ballooning lowers.

The ‘glamorous’ segment has an intensely embroidered and flower design-laden Bohemian gown. It is the a-line, floor length gown with a flowery appearance for a blossoming bride to be! Another ball gown replete with the glam effect has a central ribbon acting as a waistband and a coat accent. The defining feature of that gown however are the silk ruffles that enhance the top and the base giving a unique appearance.

Among all these elaborate gowns is one with a minimal, modernistic look. With a V-neck, this strapless gown would fit well on those with slender bodies. Accented with the Swarovski crystals, the gown also contains a ribbon detail.

Where Carolina is concerned, you can always expect the unexpected. Duchess satin that is faintly color-blocked with champagne and pale dove grey forms a surprising contrast for traditional fabrics. Though the embellishments are subtle, they are luxurious and range from Art deco to floral embroideries that the bride could customize. The personalizing touch comes from the initials of the bride inscribed on the petticoat of the gown. Thus, the winning touch to these gowns comes from the fact that each one of them has a different personality and flavor.