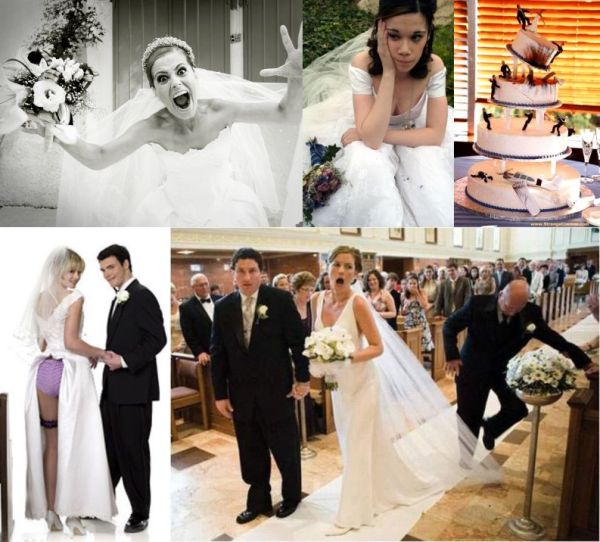 A wedding is meant to be a magical day where everything is supposed to be romantic and filled with love and laughter. However, some weddings are made memorable not by the glitter of the bride’s gown or the loveliness of the service and the grace of the first dances but by disastrous incidences that get imprinted into the memories of the guests to be told and retold into infamy as dinner table anecdotes. Here’s our compilation of some of the most disastrous wedding stories that ruined the most wonderful day for these brides and grooms.

Bride twists her ankle right before the ceremony

Just before entering the church, bride Meghan McCoy fell on the stairs of the building in her 3 1/2 inch heels which resulted in several torn ligaments and a severe sprain in her ankle. Instead of panicking, the brave bride asked her brother to carry her down the isle and the guests were left thinking it was just the bride being quirky. Even her groom Lauren Cote didn’t realize what has happened until he said “I do” after which the bride was immediately rushed to the emergency room. The brave bride returned to her reception an hour later and even had her first dance with her new husband on her new crutches!

Storm forces couple to get married in jeans and t-shirts

Bound Brook, N.J.-based Keisha Jackson was putting the final touches on her wedding plans when a huge storm hit the town. As the town started to flood, Jackson packed off her two sons and fiancé Jonathan Denman and took shelter in a nearby Presbyterian church. The bride had stored her wedding license in her purse though she didn’t have the time to get the rings. However, the brave duo were thankful that their little family has been able to escape a potential disaster unharmed and the couple tied the knot in the church office with everyone dressed in their regular sneakers, jeans and t-shirts.

Valerie Langley and Craig Eissler had the wedding ceremony they had dreamed of and just when they thought they have had the perfect wedding, their reception hotel caught fire. With the guests standing out in the street in front of the hotel and fire trucks busy putting out the fire, the newly weds thought their reception had been ruined. However, a clever friend brought a guitar and started singing ‘Disco Inferno’ in the street itself and the guests kicked off the festivities outside. An hour later, when the fire had been safely contained in another part of the hotel, the party was moved indoors.

Hunt Leigh Thompson and Ron Stevenson had put all their money on a Florida yacht club for their wedding reception though the couple found out that the race track next door to the venue would be hosting a grand prix race the same day. Since Thompson worked nearby, he knew how loud it could get and the couple was freaking out that the reception would be ruined because of the noise from the tracks. However, the second floor reception barely escaped being drowned out by the noise thanks to a wonderful deejay. When they were getting their photographs taken outside, the race car drivers even invited them on the track with the guests asking the couple to invite everyone to the racetrack for their first anniversary.

Restraining order gets the groom arrested

Timothy Cole had a tumultuous relationship with his wife and when the pair first split, she even took out an order of protection against him. when the couple decided to give their marriage a second chance by getting married a second time, the cops arrived, charged Cole with first-degree criminal contempt and arrested him for standing too close to the bride. Cole had earlier had a fight with one of the guests at the wedding which had been the reason for the police arriving at the scene. The officers remember Cole from previous arrests and promptly got him away from the bride.

Brit Sophie Clarke had been planning her dream wedding for three years. The fairy-tale event included handmade invites, a horse-drawn carriage and a $3,000 dress. As the bride started on her journey to the church with her father, the horse got spooked by something and made a dash for it. The carriage driver and his assistant were thrown from the carriage and the bride’s father pushed her off the carriage before jumping out himself as the horse shot straight at an oncoming truck. The bride received a concussion and her dress was left bloodied. Six weeks later, she married her fiancé in a much more intimate ceremony after having realized that the posh things mattered much less to her than being the wife of the man she loved.

Drunk bride flips out and gets arrested

Connecticut bride Adrienne Samen spent a few months getting the details of her dream wedding right. The wedding had been going as planned when the bride had a drink too many at the reception. She started yelling at her new husband and even threw the cake and a few vases at him. But she really flipped out when the bar tender told her they would no longer be serving any more drink that night. Even when the police were taking her away, she didn’t sober down and even bit a cop, made a few obscene gestures to them and even kicked a window of the police car out of its track! She was promptly charged with criminal mischief and breach of peace and had her mug shot taken in her wedding gown.

Wedding guest shoots himself at the reception playing Russian roulette

At a Russian wedding in 2010, a friend of the groom dared guests at the wedding to have a go at the game of Russian roulette using his pistol. The man put the gun to his temple and clicked and with no bullet emerging from the gun, grinningly asked if anyone had the courage to have a go. Another guest at the wedding had a go at the game though this time a rubber bullet thrust into his skull at point blank range. Even though the owner of the gun insisted that he was positive that the gun was empty, police opened a criminal investigation into the matter after the injured man was left struggling for his life in the hospital.

Collapsed deck dumps newlyweds and 80 guests into a muddy lake

Marli and Hoffman van der Walt were enjoying their wedding reception with 80 guests at a wooden deck on a muddy lake at South Africa’s Dragon Peaks mountain resort. The celebrations soon turned into frenzy as the deck collapsed and all 80 guests including a baby, the bride’s 88-year-old grandmother and wheelchair-bound mother fell into the lake. Bystanders quickly jumped into the lake and rescued the wedding party who went on to enjoy the dinner despite being drenched in muddy water.

Austrian couple Dietmar Koch and Tina Albrecht were enjoying their castle wedding until the bride decided to answer the ritual “ Do you take this man to be your husband?” question with a joking ‘I Don’t’. In Austrian law, answering this question in negative results in cancellation of the wedding, the registrar refused to wed the couple even though the bride has quickly followed her joke with a yes. In keeping with the law, the wedding was forced to be rescheduled ten weeks later.

You know a wedding day is cursed when a lot of things go wring in quick succession. Bride Vilma and her groom Paul Cassidy had the wedding ceremony from hell when the 16-month old pageboy collapsed and had to be rushed to the hospital. Next, the groom’s mother collapsed and as she too was being taken to the hospital, a guest at the wedding got a text message saying her father had passed away. As the couple tried to brave it through the reception, a glass cover fell on their toddler son’s head and he boy received a cut. Their daughter too cut her head open a few hours later. Later in the day, when the groom wanted to go visit his mother in the hospital, he found that his car had been parked in a locked parking lot.

Bouquet throw brings a plane down

Italian bride Isidoro Pensieri had planned an elaborate ceremony which was to be concluded when she tossed her bouquet out of a microlight plane flying past the female wedding guests. However, as the bride tossed the bouquet out of the plane, it got sucked into the plane’s engine which caught fire, exploded and dashed into a nearby hostel. Luckily, all the wedding guests, the bride, the pilot and people at the hostel escaped unharmed though the bride received multiple fractures.