Tom Cooper who is just 25 years old has terminal illness because of his throat cancer! Life seemed so blue for him. But this Valentine’s day he proposed the love of his life Tammy Dale, a beautiful 23 years old girl. She has been his girlfriend for a very long time and has two cute little daughters too. Tom always dreamt of marrying his ladylove, but his illness shattered his dreams. Both of them could never collect finance for their wedding, owing to Cooper’s expensive treatment. I am sure after reading about their story you must have immediately said “oh! What a tragic story of love this is.” But, life isn’t as harsh as we think it to be. The couple was struck with an idea of creating a Facebook page called “Help Tom Cooper & Tammy Dale get their dream wedding”. They posted a video telling their love story on the Youtube! And what happened was surprising. They got funded $30,000 plus for their lavish dream wedding, that too by strangers who saw or read about their story through Facebook. 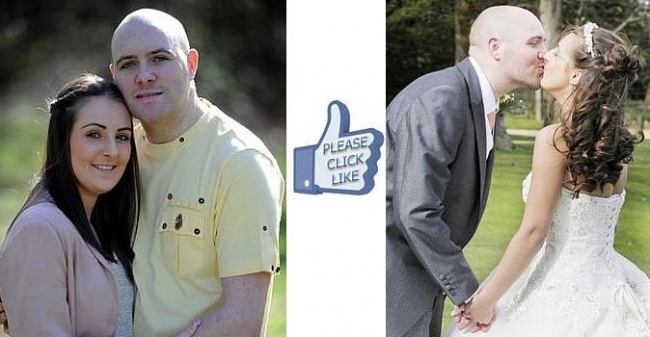 Being so close to death gave Tom so much of grief but he along with Tammy wanted to give one great memory to their two lovely daughters. So the couple came up with the Facebook page idea. Deteriorating health led Tom to give up his job and therefore he had no money to fulfill his wedding dream. Even Tammy could not work because she is the one who looks after her dying groom. This was the time when they thought of getting some help. And they chose to give a try to the social networking so as to raise fund for conceptualizing their dream into reality. They never dreamt of what actually happened just after they asked for fundraising, through their Facebook page!

Just in four weeks time after the creation of the Facebook page, the funds started to pour in. The people who funded for the beautiful cause were not just friends and family, but complete strangers too. They got the offers for the wedding venues, wedding cake, wedding limousine, wedding photography and many a more aspects of a wedding that even Tom and Tammy never imagined about. Now that’s called the ‘power of social networking’. God Bless Tom and Tammy and all the fundraisers who in actual made all this happen!