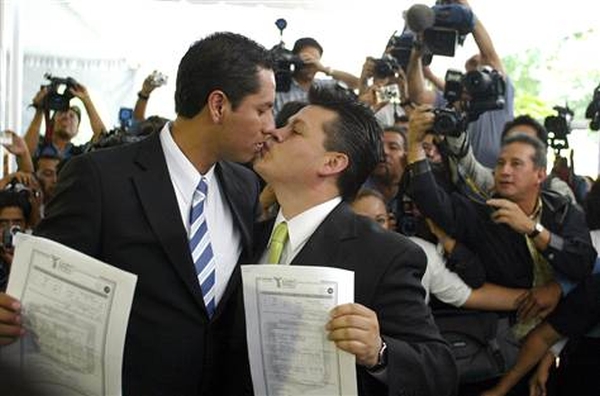 Gay marriage has been a hot topic and has stirred up a great debate in the public with law makers, conservative populaces and religious organizations fervently opposing the legalization of same sex marriage across the world. However, with the lifestyles and life choices of LGBT (lesbian, gay, bi-sexual and transgender) folks gaining acceptance with the general public, But the question still remains – should gay marriages be legalized and be given a more elevated status than “civil unions”? Wedding Clan investigates how legalizing gay marriages can benefit the LGBT community and society at large.

People opposed to gay marriages often try to quote religious texts to state that gay marriages are somehow immoral and against nature in some way. However, given how most religious texts are not actually written by “God” and scholars accept them as being subjective since they only display the views, language and sentiments of the people who wrote them (yes, people wrote all religious books, not God). Like all literature, religious texts too are open to interpretation though establishments like the Roman Catholic Church and other bodies that claim to have some kind of a moral authority over issues pertaining to their particular religion. Since religious intuitions like the Church no longer have a say in lawmaking and deciding state policies, they should not be allowed to negatively influence the legalization of gay marriages. Even though most major religions across the world still consider homosexuality a sin, Christianity has relaxed its stance on the matter and allows homosexuals to become priests and minister. The question then remain, if a gay person can preach the word of God, why can’t he or she be allowed to be legally wedding with recognition from their religion?

Even though civil unions allow gay people to be recognized as a couple in the eyes of the law, they are not allowed the same benefits as a legally married couple and issues like joint ownership of property, paternal and spousal rights, decision making capacities in medical situations, etc. are not offered to same sex couples who have entered a civil union. Legalizing same sex marriages would allow gay couples to enjoy the same benefits.

One of the major deterrents for same sex marriages has been the lack of social acceptance for gay unions. Even though homosexuality remains taboo in many parts of the world, being openly gay is fast gaining acceptance as a legit lifestyle choice. Many countries have decriminalized gay sex and many others like Sweden, Spain, South Africa, Portugal, Norway, The Netherlands, Iceland, Canada, Belgium, Argentina and Mexico have legally recognized same-sex marriage nationwide already. With public acceptance for homosexuality not being an issue anymore, the case for legalizing gay marriage only strengthens.

Less than a hundred years ago, women did not possess the same legal rights as men. Less than half a century ago, people of color were discriminated against and were denied many legal rights that non-colored citizens of a country had. The world has come a long way since and strong laws ensure that minorities cannot be discriminated against anymore. By the same legal definition, denying same sex couples the right to be legally married is equivalent to the denial of civil rights to a minority and counts as discrimination. If a gay couple wants to be legally married, it doesn’t really hurt society in any way which is why same sex marriages should be legalized.

Homosexuality is not unnatural

A lot of people claim that homosexuality is against nature but they often forget that there is a long list of animals, including mammals, birds, reptiles and insects that display homosexual behavior. One of the main reasons why marriage as a situation is still popular is because it makes the process of procreation more legal and less anarchic. However, non-gay couples who cannot have children of their own and adopt are allowed to enjoy the same social status as couples who can procreate naturally which throws the “marriage=procreation” logic out of the window. If a non-gay couple who cannot procreate doesn’t weaken the institution of marriage, neither does a gay couple who chooses to adopt.

Lesbian couples have the option of having children of their own using a sperm bank. However, that option is not open to gay couples and even though surrogacy is one of the options for such couples, most of them choose to adopt instead. Legalizing gay marriage will allow gay couples to adopt children together and enjoy the same paternal rights over them as married couples of the opposite sex do. Critics say that being adopted by a gay couple exposes a child to an unnatural social environment but then again so does a home where married parents are abusive to them or to each other and the trauma of being abandoned by a parent, having an abusive parent, divorce, extramarital affairs, etc. aren’t too good for a child growing up either and these ills have been around in legal marriages of opposite sex couples for centuries! If humanity can survive a crappy marriage between parents of their opposite sex, growing up in a home with two mothers or two fathers cannot be all that developmentally traumatic!

Same sex marriages will strengthen the institution of marriage

Let’s face it. Couples of the opposite sex are just not that into getting married anymore and the institution of marriage is facing a dire lack of supporters. So why deny people who actually want to get married the option of being able to do so legally? With opposite sex couples choosing co-habitations instead of getting married legally and the rising rates of divorces across the planet, legalizing gay marriage can actually help the institution gain some of its sanctity back.

The historical precedence for gay marriages is strong

From highly ritualized unions to unsanctioned, informal relationships, same-sex marriages of various types have existed throughout history. The Kama sutra, one of the most definite literature on sexual practices that was composed between 400 BCE and 200 CE, prescribes many sexual techniques and practices for homosexual couples which indicates that homosexuality wasn’t entirely taboo in the region in that period. Same sex unions are known to have been accepted and even promoted in ancient cultures includes ancient Rome, ancient Greece, ancient native American cultures, during the rule of the Ming and Zhao dynasties in china and one of the most notable incidences of a gay marriage stems from the Monastery of San Salvador de Celanova that possessed historic documents about a church wedding a small chapel that occurred on April 16, 1061 in Rairiz de Veiga in Spain between two local men. This kind of evidence points strongly to the existence and acceptance of gay marriage at the dawn of human civilization and makes a strong case for the legalization of gay marriage in the modern world.

Public opinion on gay rights should be reflected in the law

In terms of policy making, public opinion has been a strong driving force and the most notable among them are the feminist movement win many rights for women, the anti-segregation movement that saw people of color gain the same civil rights as white people, the communist revolutions that ensured better labor laws, civil and political revolutions that liberated nations from feudal domination etc. All of these revolutions and movements tell us that outdated ideas and laws need to be replaced with policies that reflect the attitudes of the larger majority at a given point in time. Since engaging in homosexual intercourse is no longer considered unlawful, not providing same sex couples with the same legal recognition as a married couple of opposite sexes cannot be justified anymore.

Even though homosexuality is not outlawed anymore, the main reason why same sex couples should be allowed to enjoy the same legal rights as a couple of opposite sex is because legalizing gay marriage will allow marriage acts to be applicable to gay couples as well. Even though marriage acts vary from country to country, they do provide a lot protection to married people and they enjoy rights that protection against abuse, adultery etc. and extending these rights to same sex couples will benefit from having the protection of the law.