Indian weddings encompass a great variety in terms of the customs and traditions. This is because India has been a secular land that has welcomed into its bosom, people from all countries, religions and races. The diversity shows even in the wedding rituals and customs. These traditions are varied and very interesting. But all of them have a history and significance behind them. Here , we examine 10 interesting practices from Indian weddings. 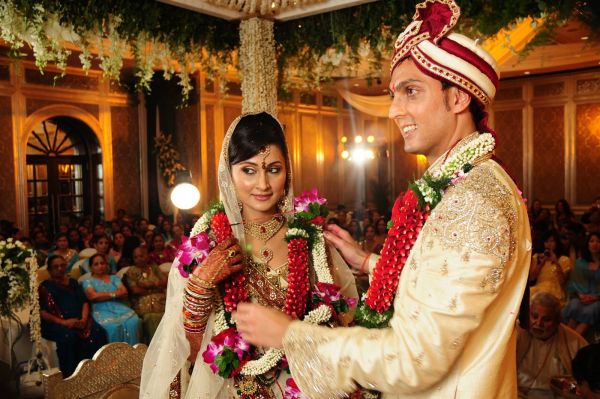 South Indian marriages have a poignant practice. The priest is about to tie the groom and bride eternally in marriage when the groom decides to leave everything and seek God in life. The bride’s brother then rushes to catch hold of the groom and then convinces him to return and wed his sister. This is symbolic of the fact that the goal for a married couple is to seek God as the goal of their life. They must do it together, walking hand in hand and side by side.

Among the Sikh community, there is the practice of playing games as soon as the married couple arrive home. The groom’s sister takes a piece of long string and ties many knots into it. The bride and groom have to open up the knots as fast as possible. This is again to symbolize the fact that the bride and groom would be together in dealing with all the knotty situations that life might throw up for them.

Among the Gujarati community, there is a custom according to which the mother-in-law hold the nose of the groom. This is to remind him that he is taking away her daughter and therefore, from that day on, he should consider her also as a mother and take care of her well-being and joys. It also serves to remind him of the responsibilities towards the bride

The Muslims in India have a custom wherein the groom presents ‘meher’ to the bride. It is monetary gifts and other presents given in two parts – one before the consummation of marriage and the other after the marriage in small parts. These are gifts that the bride may use as she pleases.

Among some Hindu communities, the bride is given a knife or dagger for protection. This is an object that she is supposed to keep with her all the time to make sure that no male gives her unwanted attention or makes advances on her.

7) Abduction of the bride

Some tribes in India have a really strange practice. The groom abducts his bride and keeps her in hiding for a period of a year. If he is able to keep her location a secret from her parents, he becomes the natural suitor and husband for her. When the abduction is done, the young man is expected to carry away the going-to-be bride on his shoulders.

8) Covering groom’s face with a veil

North Indian tradition demands that the groom’s face be covered with a veil made of flowers called the sehra. The sehra is tied to the turban he wears. This is done to prevent the groom from becoming victim to any bad looks or the evil eye. However, just before the betrothal, someone from the bride’s side lifts this veil just to ensure that it is not some impostor!

In most of the Indian marriages, there is the practice of the bride entering the groom’s home for the first time. When this is done, a vessel filled with rice or wheat (depending on what is the staple diet of the people) is placed at the doorstep. The bride kicks the vessel with her right foot and enters the home. The right foot is considered sacred and auspicious and the act in itself symbolizes the abundance and prosperity the bride is getting to the home she is entering.

The concept of kanya daan is also common in almost all Indian weddings. This is an act by which the father offers his daughter to the groom. The practices associated with it vary and one variant is done with the father seating his daughter on his own lap.

Some Wedding after party etiquette’s you should know!