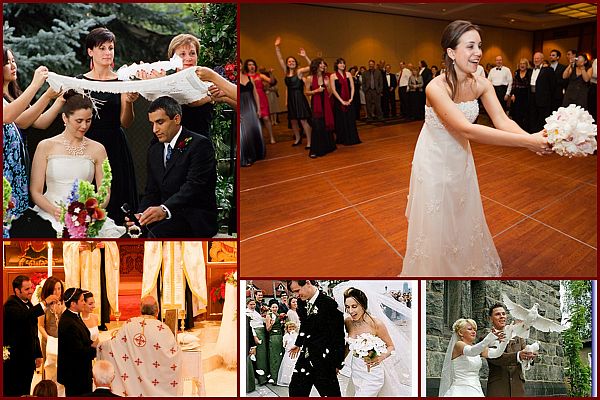 This is definitely one of those wedding ceremony traditions which draws the attention of almost everyone. This tradition traces its root in the Buddhism religion and is inspired by the life of Buddha. According to this tradition, the groom and the bride are expected to bring a small jar of water along with them on the eve of their wedding. The water in the jar must be from a place that has a great meaning in their life as individuals. This water is a symbol of the individual identity that both of them have achieved so far in their life and defines their present.

2. Blending of the sand

This tradition is a way to symbolize all the phases of the life of bride and groom, including their past, present and future. All these phases in the life of the couple are represented using different colored sand. During the wedding ceremony, the couple is asked to pour these sands of different colors into a glass jar.

3. Blessing of the seven spices

This wedding ceremony tradition is native to the Middle East region. According to this tradition, the bride and the groom are asked to scoop out spices from seven bowls into a small pouch. These spices symbolizes the qualities of a prosperous and well balanced marriage. Seven small bowls, each of them containing different spices are placed in front of the couple and then they are asked to take a bit out of each of the bowl and place it in a pouch. Each spice represents a blessing. Rosemary is for prosperity; garlic is for the safety; nutmeg is for the romance in the life of the couple; brown sugar assures a sweet married life; paprika represents passion; savory is for maintaining balance in the life and the bay leaf is used to represent that extra spark in the life of the newly wed couple.

This tradition signifies the real beauty of a marriage. A marriage is not just a bond between two individuals, but includes the boding of the families too. The family members, elders and parents of the bride and the groom are asked to mix marbles in a bowl which results in a lovely mosaic. This mosaic is the representative of the idea of bringing together two families.

In Asia, red color is considered to be sacred and it signifies joy. As the name suggests, this tradition has its roots in the Cambodian culture. This tradition originated from an ancient fable according to which an invisible red cord connects people who are destined to be together as a couple. With passing time, this red cord shrinks in length bringing the two closer to each other. The wedding ceremony officiant while making a wish for the couple ties a knot in the middle of a red cord, this cord is passed on to the others who are asked to do the same i.e., make a wish and tie a not. The process is repeated until everyone has tied a knot. Finally this cord is draped around the neck of the bride. This cord always reminds the couple of the wishes that were made for them by everyone who attended the marriage.