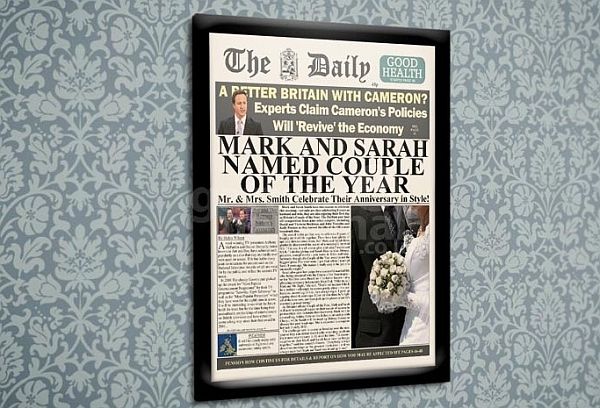 First wedding anniversary is a time to reflect on the special moments spent by the married couple and all the efforts they made to make their new life happy. It is a celebration of a complete year of partnership and the growing love for one another. First anniversary is special, so giving a present to the couple as a token of love to compliment a year of togetherness will be a great thought. Have a look at some of the options that will make a suitable first anniversary gift for couples.

Declare the couple’s successful one year of togetherness in the form of a personalized news story. Let the declaration be on the front page making headlines, highlighting their name, special moments and plans about their anniversary celebrations. The newspaper article will be fun and thoughtful at same time and will be surely cherished by the couple. 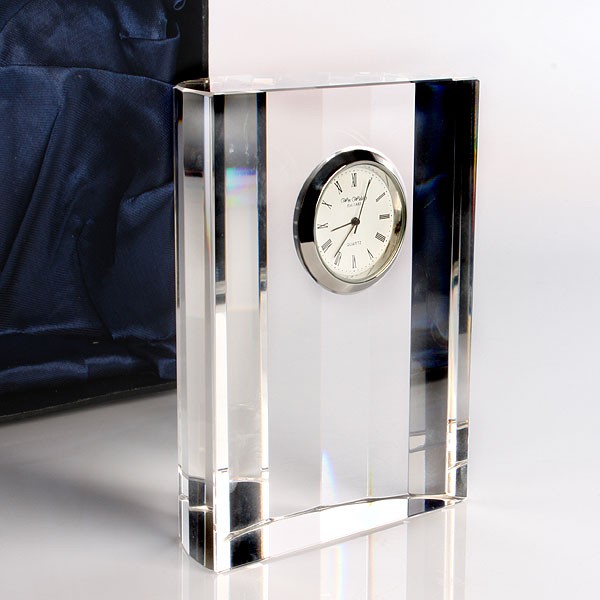 Let the couple reflect on the time they spent together as you give them the very elegant Engraved Mantel Crystal Clock. It has been fashioned out of a single block of crystal glass, which disperses light that falls on it in a mesmerizing way as it is placed on a shelf, mantel or desk.

The absolutely stunning Personalized Anniversary Cushion will account for a warm and cozy gift, which will etch an eternal smile on the couple’s face as they see their cheerful photograph printed on the cushion. The beautiful gift can be placed on the bed, chair or couch as they enter a fresh year of marriage. 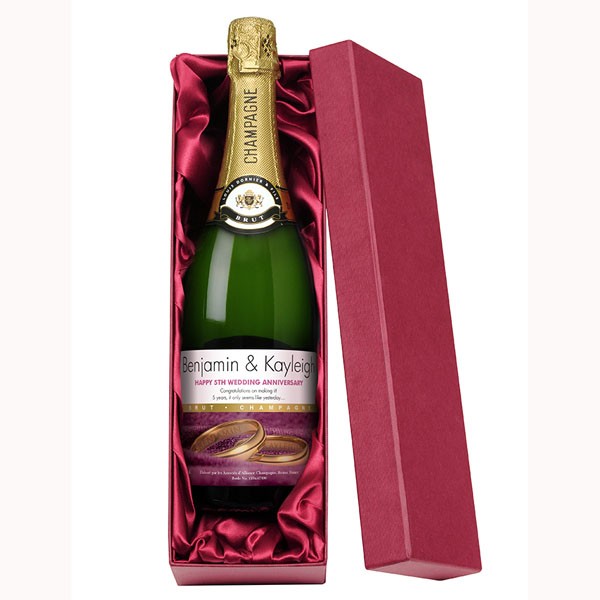 Raise a toast with this special gift to celebrate the special wedding anniversary. Personalized Anniversary Champagne will come with a special label that reads out the names of the couple, a unique message and date of marriage. The personal gift will stand out and for the first time the bottle will be valued more than what it holds inside it. 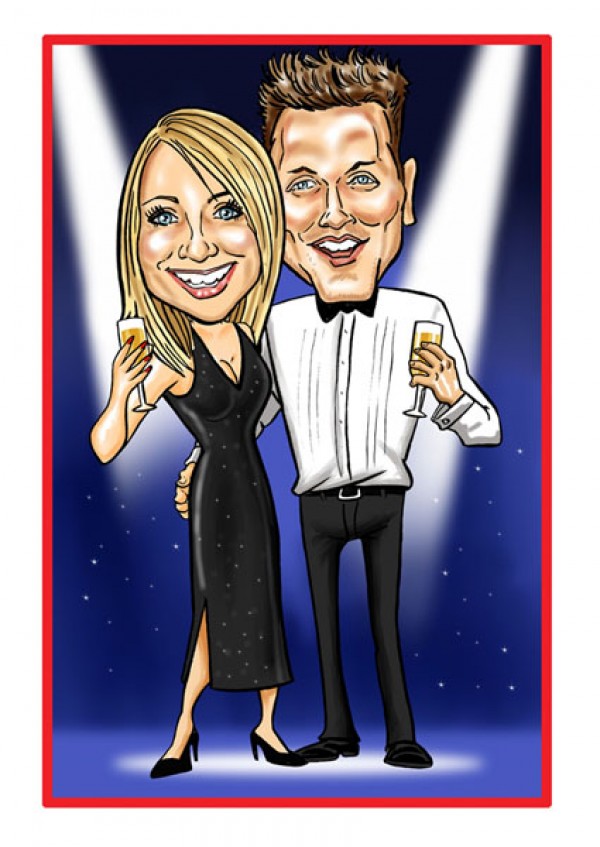 Commemorate the day of the wedding with a fun present in the form of a Personalized Anniversary Caricature. See them hang it proudly on the wall as they fall in love with the fantastic piece of art. There are plenty of choices, in terms of styling, available which makes it a superb and unique gift for a couple celebrating the moments of love. 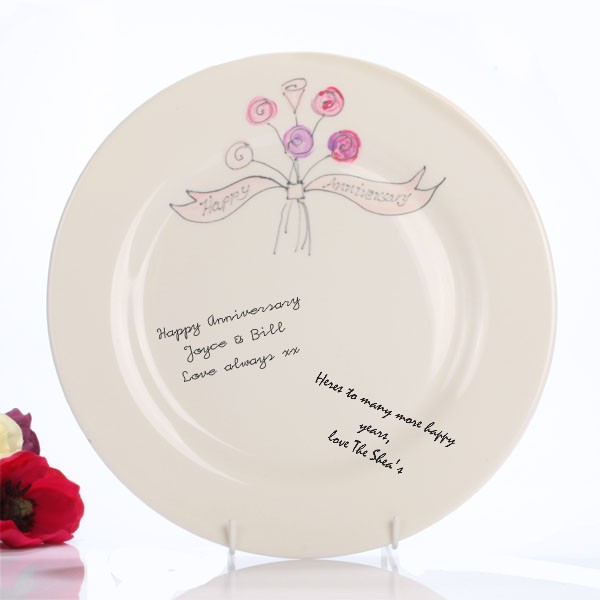 Sign and Seal Anniversary Plate will be a wonderful gift idea for a special couple as you get it signed from family and friends. Seal the special wishes forever by placing it in a household oven and see the couple display it proudly on the shelf or mantel. 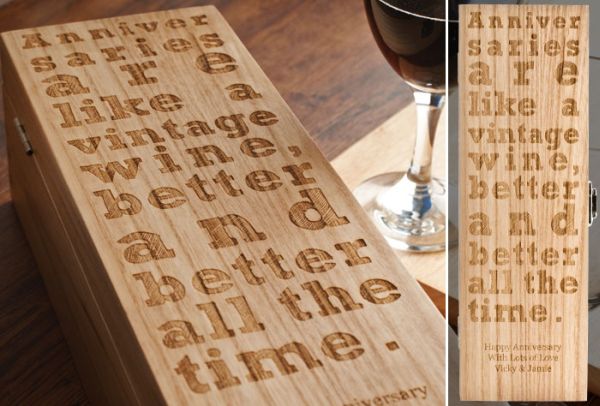 Adding a finishing touch is as important as the present itself. Personalized Luxury Wooden Wine Box will add the much needed classiness and grace to the drink you want to give on the couple’s first anniversary. A personalized message will be meticulously engraved on the hinged lid box. It will also make a perfect keepsake gift, which will make the couple remember the day forever. 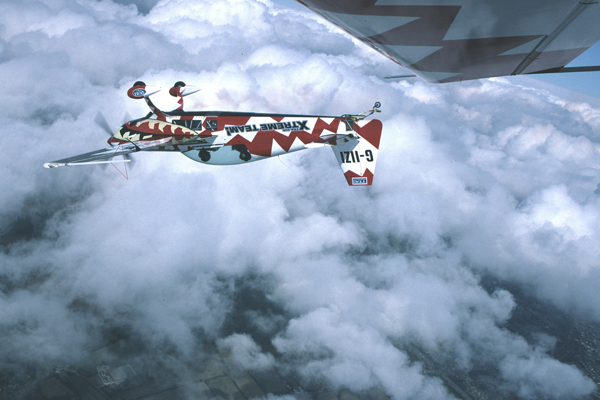 If the couple is a bit too adventurous, then make reach the sky where they will defy gravity and experience and adrenaline rush, a memory that they will treasure till their last breath. As the plane takes aerobatic turns at a speed of 200 mph, the couple is sure to have a time of their life with their hearts palpitating not only because of the excitement of their first anniversary, but also the thrill attached with the experience. 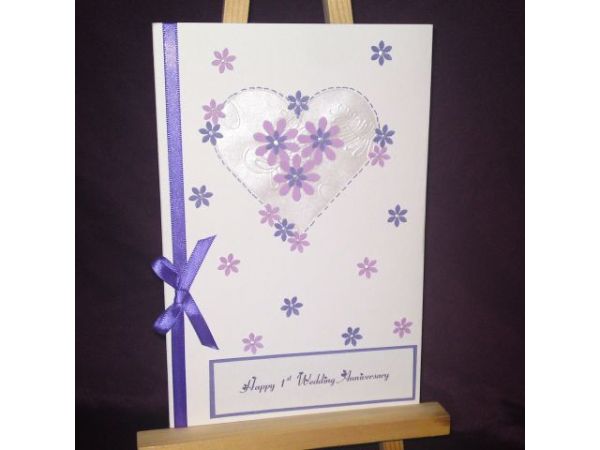 First anniversary is also known as paper anniversary traditionally, so giving a paper gift will add a greater meaning to the every loving relationship that the couple shares. A Handmade First Wedding Anniversary Card will be a great gift as it sends out good wishes and blessings for many more such celebrations to honor the couple’s life. 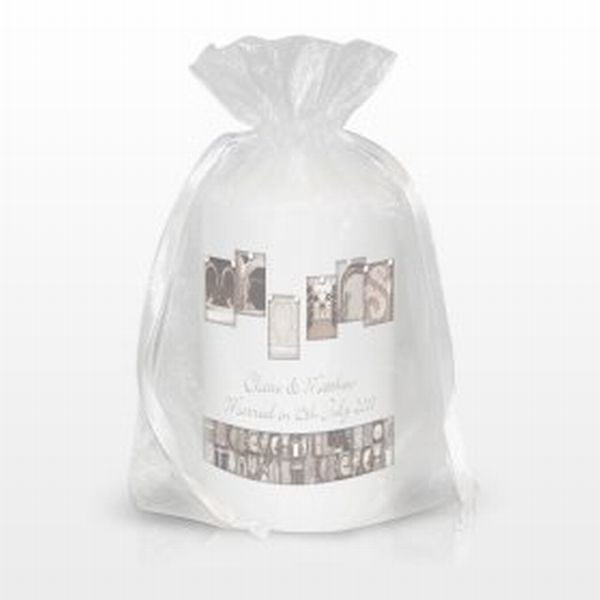 Affection Art Mr & Mrs Candle will perfectly reflect the love that exists between a couple. It will make the deserving couple wanted and loved as they get submerged in the warm atmosphere created by the candle, while injecting a sense of romance. A special message will carved on the candle, making it a great keep forever.