Every little girl grows up dreaming of a big wedding where all eyes are on her and she is the dazzling star of the day. Most girls even start piecing their dream weddings together bit by bit as they grow up. However, not everyone is as thrilled with the prospect of losing a few good months or years of their lives planning the big wedding, coordinating florists, venues, guests, dress, hair, makeup and all the other frills a big wedding for 200 guests comes with. Even though most people are opting for smaller weddings given the state of the economy, even a ceremony with 50 of your closest friends and family can set you back a small fortune and you’d still have to immerse yourself in the wedding planning if you want it done just right. So why not consider an elopement? 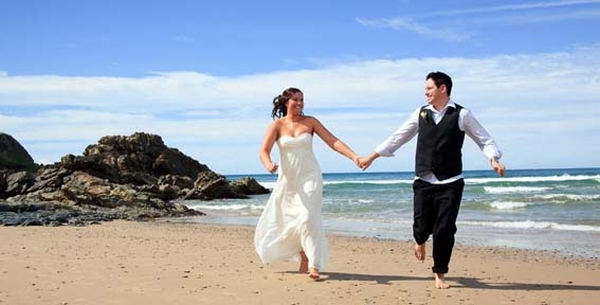 Elopement has been a very popular trend with celebrities who want to escape the public eye and want to keep their big day a secret from the media and fair weathered friends who can potentially leak photos of their wedding to the highest bidder. The trend is also fairly popular with older couples who have been through the rituals of the “big wedding” and want their second or third wedding to be a much simpler affair.

When did it begin?

Nobody really knows when elopements first caught on, but ever since marriage has existed as an institution, people have found ways to either get hitched in haste. Couples have been eloping to avoid persecution from non-consenting family, peers or society in cultures where a couple’s compatibility in terms of social status, religion, region, race etc. are considered paramount. These kind of elopements usually are an end-resort in cases where social pressures do not allow the couple to be wedded with due ceremony.

Why has the trend caught on now?

With the global economy in turmoil, more prudent couples have started to prize financial security after getting married more than having a big wedding ceremony. Since the cost of hosting a wedding has also skyrocketed, most couples have started to opt for budgeted and smaller scale weddings. However, even the smallest wedding can be stressful to plan and still be a bit taxing on the couple’s bank balance. Elopements, and especially the trend of getting married in an exotic location abroad, have really caught on. This form of getting married is also popular with eco-conscious folks who don’t want to have the big carbon footprint of a big wedding bash on their consciences and choose to elope instead of having a big ceremony.

How does it fare against a traditional ceremony?

As dreamy as a traditional wedding is, it is still expensive for the person paying for it, stressful for the bride and groom to plan and requires the couple to coordinate the event with the schedules of family members and close friends and more often than not couples often even have to use up their annual vacation days to fit their wedding in with their work lives. An elopement, on the other hand, can be had as an impromptu affair or even as a planned even where a couple can decide to announce their intention of getting married on their social networking pages, get their marriage license, go away for a weekend or a vacation and get married at virtually any spot they want in the world including romantic venues such as the Eifel Tower, the Pyramids of Giza or even aboard a gondola in Venice since they only need a licensed minister to make the wedding legal and a gathering of three people at any of these spots wouldn’t require the couples to get special permits.

What are the downsides of an elopement?

As romantic and exciting as elopements are, they really cannot offer couples the same sense of social approval as a traditional wedding in front of family and friends does. If you have always dreamed of walking down the aisle at your father’s arm or kissing your bride at the altar, then an elopement would leave you with a sense of having missed out on that experience. People who want their close ones to be a part of their big day may also find an elopement slightly less fantastical as a big wedding.

Are elopements the future of weddings?

Given the scale and magnitude of weddings as a global business, elopements can never be considered to replace the fantasy and thrill of a traditional wedding ceremony. However, the trend is certainly set to catch on with people looking to make their wedding a less stressful or expensive affair and would continue to be patronized by people who are getting married for the second or third time and are not as keen on the spectacle and expense that a wedding ceremony comes with.

Why you should try an elopement instead of a big wedding?

If you don’t like the fanfare that a wedding ceremony comes with, want to get married to the person you love but also want to walk into the new relationship with your finances in a good place or simply don’t want to pressure of planning a wedding, a planned elopement may be just the thing for you. You won’t be any less married to your spouse if you don’t have a big bash in front of everyone you know which makes an elopement the perfect wedding idea for someone who wants their wedding to be a quick, painless and stress-free affair. And your elopement does have to be a big secret either; you can choose to make your intentions public by posting details about it on your public profiles or share your idea with people closest to you via emails or texts. You can also choose to spend the wedding budget on a fabulous dress or a once in a lifetime trip to your dream destination where you can get married at a fantastic, one of kind location and enjoy the rest of the vacation as your honeymoon. You can always throw a dinner party as a reception for your family and friends to present yourself and your spouse as an official couple in society once you return home.