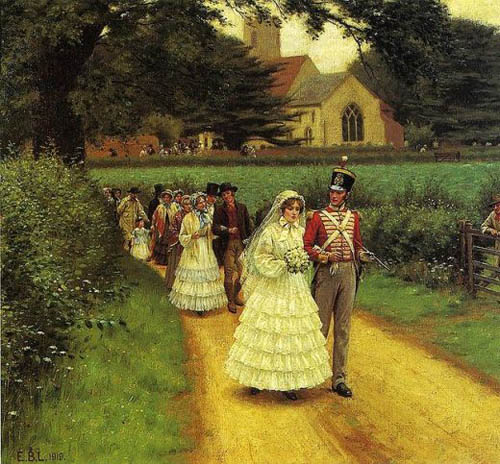 Decades ago, weddings and special occasions would be captured not with cameras but with an artist’s talented use of a paintbrush. The painstaking process was finely detailed and presented to the newlywed couple who would cherish it for years to come. Now, however, cameras have taken over to record wedding occasions and a few among us can’t help but wish for the old world trend of painting a couple’s happy moments instead of the speedy point-and-shoot method favored by photographers of today. Thankfully, several of these stunning art works have been reprinted to give us a glimpse into the lost art of wedding portraiture.

Edward Blair Leighton painted The Wedding March close to the end of his career. The bride and groom are shown leading the way down a country lane followed by their family and wedding guests. The newlyweds are surrounded by lush greenery with overhanging tree branches adding to the countryside feel.

Blessing of the Young Couple before Marriage by Pascal Dagnan-Bouveret, 1880 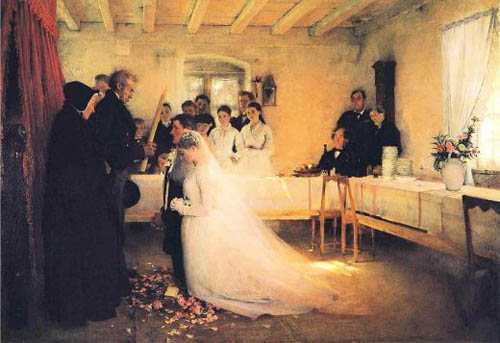 French artist, Pascal Dagnan Bouveret, depicted the blessing bestowed on a young couple by a priest as family and friends look on in this detailed wedding portraiture. The demure bride is pictured gazing down as her groom lifts his head to look at the clergyman.

Before the Wedding – Firs Sergeevich Zhuravlev 1874 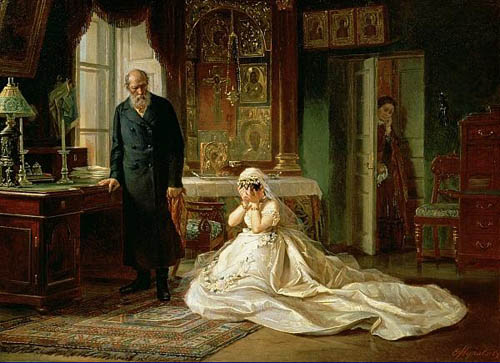 A bride’s wedding jitters have been perfectly captured by Firs Sergeevich Zhuravlev in his piece, Before the Wedding. The detailed portraiture depicts the bride-to-be on her knees with her hands to her face. A man and a woman look at the bride as she weeps. 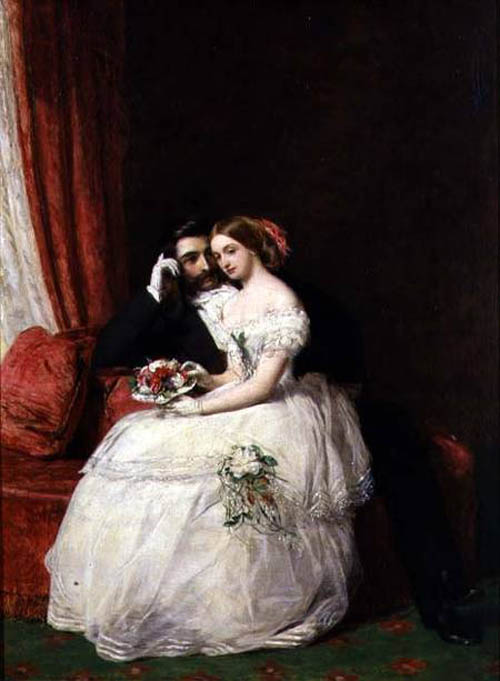 British painter, William Powell Frith, beautifully captures the moment when a man proposes to his lady love. The woman can be seen looking away demurely as the man waits for her answer and gazes at her intently. The shy bride-to-be is highlighted in this detailed painting surrounded by dark tones of black and red. 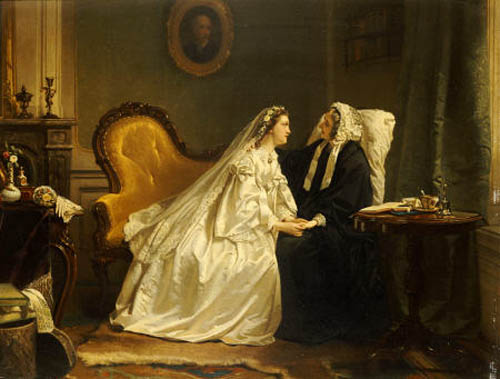 A bride is pictured receiving marriage advice from a person who looks to be her mother in this Hendrik Jacobus Scholten-painted portraiture. The older woman gazes at the bride kindly while the latter looks back intently. Soft and warm tones have been favored for this painting, lending it a gentle touch which perfectly complements the elderly woman’s kind expression. 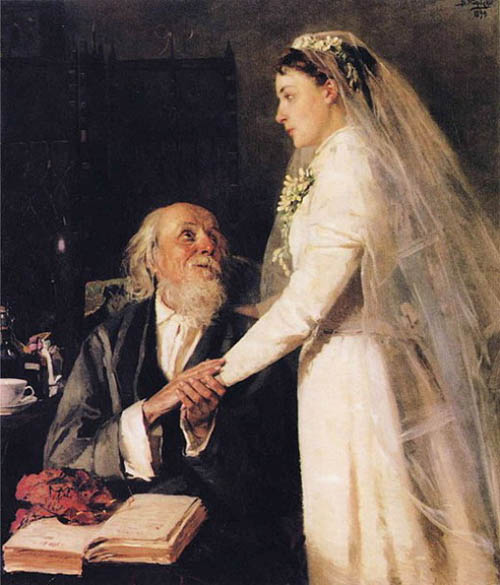 A newly married bride is seen saying her goodbyes to her father who looks at her adoringly in this portrait painted by Vladimir Makovsky. The poignant moment is captured perfectly and stands out for its detailed brushstrokes and soft tones.

Princess Alice in her Bridal Gown by Franz Xaver Winterhalter, 1862 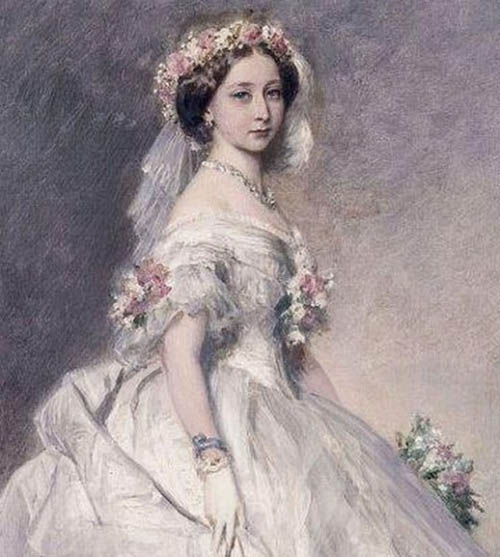 Princess Alice is portrayed in her wedding gown in this 1862 painting by Franz Xaver Winterhalter. Notice the slightly sad expression on the young bride’s face as she mourns the passing of her father, Prince Albert, who died several months prior to the wedding.

The Toast to the Bride – Benjamin Vautier 1870 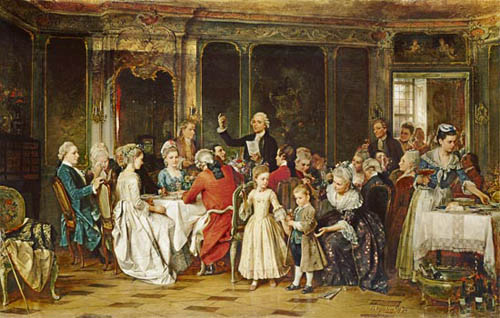 Post wedding, a bride receives a toast from a well wisher as she is surrounded by friends and family seated at a table. The inclusion of two children being attended to by a woman adds to the realistic feel of this beautiful wedding portraiture. In the background can be seen a guest helping herself to some wedding fare. 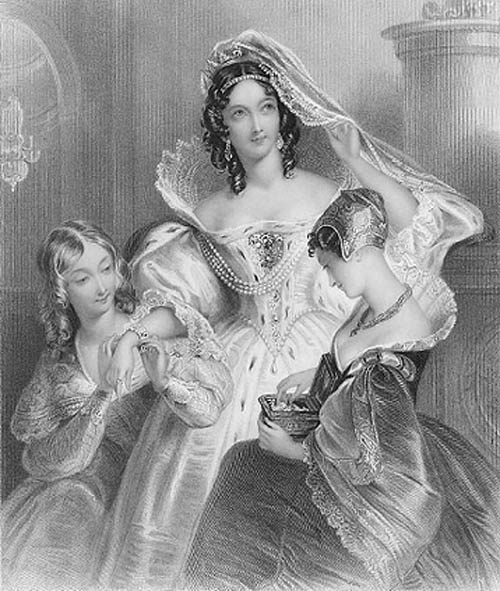 At the eve of her wedding, a bride is depicted in all her finery being attended to by her bridesmaids. The black and white portraiture is exquisitely detailed and a closer look will reveal the patterns on her wedding gown and veil. The motion of the bride’s hand as she lifts her veil to gaze at something unseen reveals a beautifully painted face. 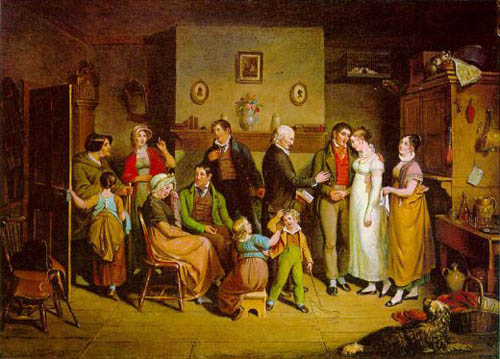 This beautiful painting of a country wedding shows a newlywed couple surrounded by family and well wishers. The ceremony takes place at home instead of a church and minus all the finery. 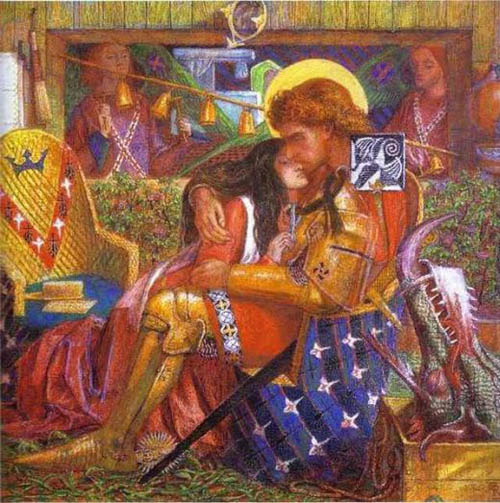 Dante Gabriel Rossetti asked model Jane Burden to pose as Princess Sabra in this painting of the wedding between St George and the princess. The colorful portraiture shows the groom presenting his new bride with the head of a slain dragon while two people look on from the background.

The Wedding Ball of the Duc de Joyeuse, 1581 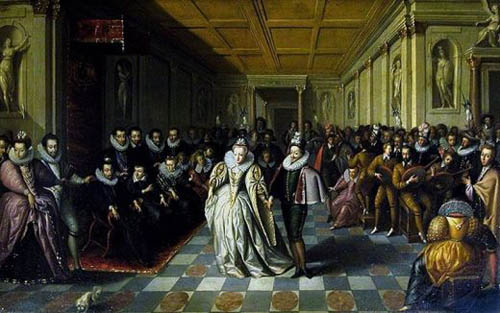 This wedding portraiture of Marguerite of Lorraine and Anne, the Duc de Joyeuse, is believed to have been painted by Hermann van der Mast though some attribute it to an unknown painter. The couple are shown standing at the center of the ball room as Queen Louise, Henry III and Catherine de’ Medici are seated to the left. 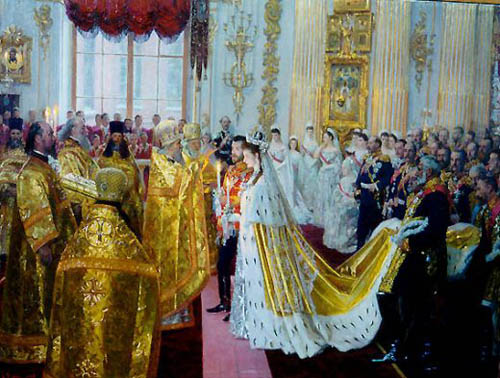 The royal wedding of Princess Alix and Tsar Nicholas ll was perfectly captured by Danish painter, Laurits Tuxen. Aside from the royal couple, the artist also portrayed several of Europe’s crowned heads among the guests like Denmark’s King Christian IX, Grand Duchess Olga Alexandrovna and the Queen of the Hellenes, among others. 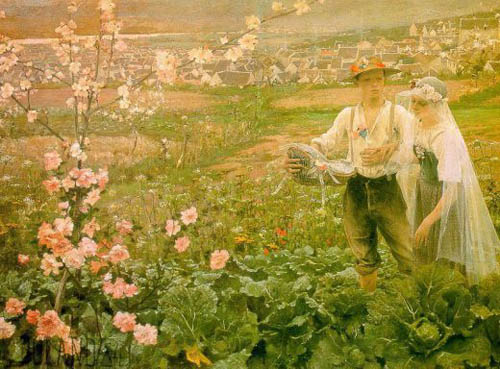 Jean-Eugene Buland is said to have favored a naturalistic style and this wedding portraiture of a young couple is testament to this. Surrounded by flowers and cabbages, the groom is depicted holding what looks to be a baby’s crib while the veiled bride lovingly gazes on.

Wedding Dance in A Barn by Pieter Brueghel the younger, circa 1616. 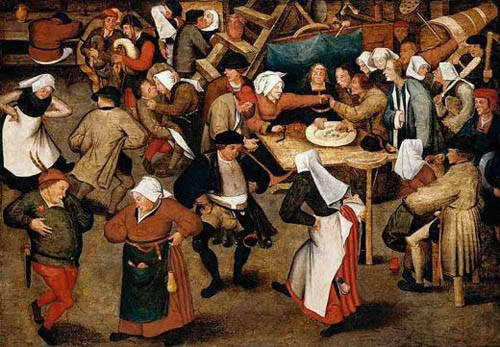 Pieter Brueghel the Younger perfectly captured a 17th century lively wedding dance taking place in a barn. Unlike the demure portraits favored by the rest, a close look at the painting will reveal mischievous goings on like guests kissing and cuddling amidst the dancers. 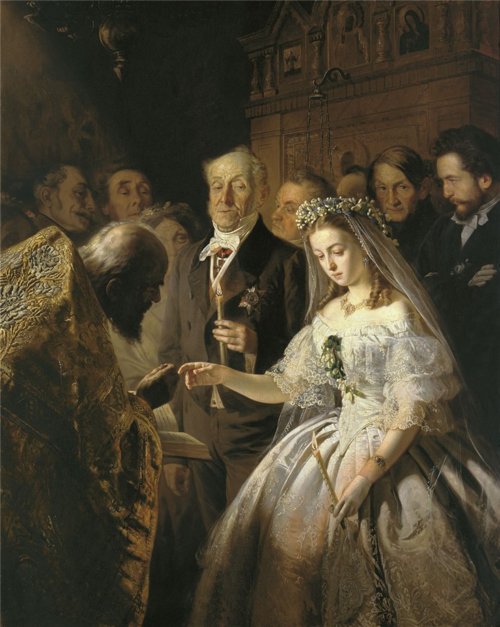 The Arranged Marriage by Wassili Pukirew is almost photorealistic in nature. The bride is depicted looking down as the priest begins the wedding proceedings. It’s difficult to gauge her expression as many emotions play across her pale face. The young bride is surrounded by men and an elderly gentleman who could very likely be her father standing by her side. 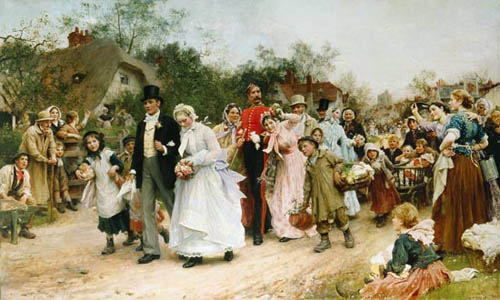 The Village Wedding is a lively painting that depicts a newlywed couple leading the way, followed by happy village folk. Curious residents also line up to get a glimpse of the bride and groom. The country scene portrays the happy faces of the friends and family though the bride herself looks a little solemn.

A Jewish Wedding by Josef Israels, 1903

Josef Israels gives us a glimpse into the intimate moment when a groom places a wedding ring on his bride’s finger in A Jewish Wedding. Soft colors and loose brushstrokes define this atmospheric painting with its sepia tone. 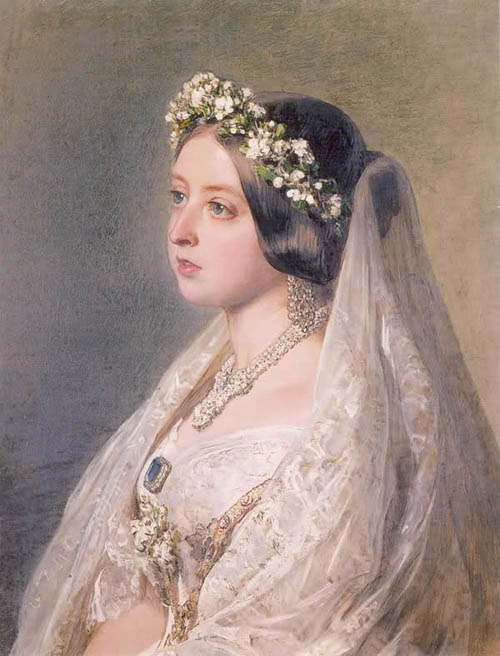 The portrait of Queen Victoria by Franz Winterhalter show an expectant and faintly blushing bride eager to begin her life as a married monarch. She is depicted as a younger version of herself in her wedding attire complete with jewelry, a veil and a crown of flowers gracing her hair. The hopeful look in her eyes is coupled with love for her husband, Prince Albert.

None but the Brave Deserve the Fair – James Crompton 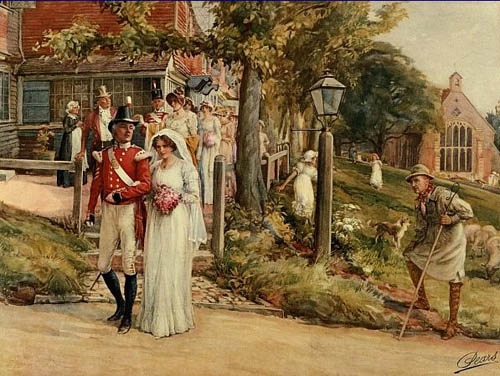 James Crompton’s portraiture of a couple exiting a church following their nuptials is a perfect example of a brave man winning the hand of the fair maiden. The groom is in uniform while the bride, in all her finery, holds his arm as they make their way out of the church. A gardener looks on at the happy couple while a young girl runs to get a glimpse of the newlyweds. 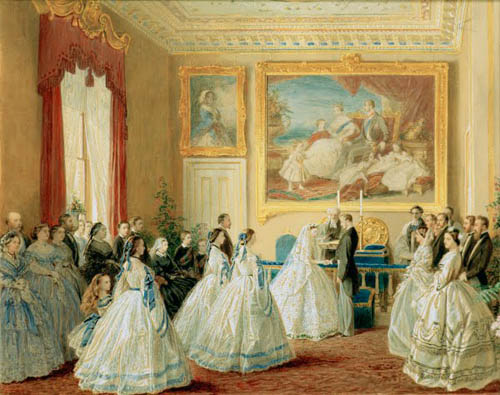 The wedding of Ludwig IV is portrayed in soft shades of amber, yellow and blue. The bride and groom are seen at the far front of the room with more focus put on the guests and bridesmaids. 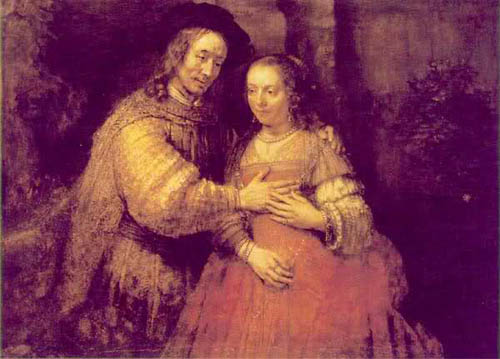 The Jewish Bride is one of Rembrandt’s more famous paintings and was commissioned by the couple themselves. Renowned artist, Vincent van Gogh fell in love with the masterpiece, famously saying that he would forfeit 10 years of his life for the chance to look upon the painting for a fortnight. 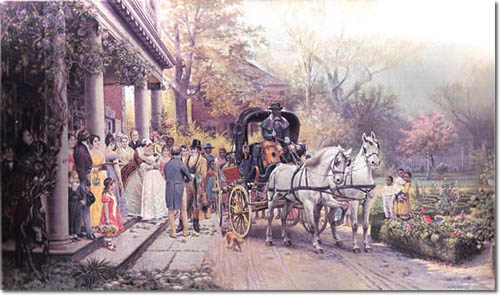 Edward Henry’s A Virginia Wedding portrays a newlywed couple about to board a horse-drawn carriage. The bride and groom are surrounded by well-wishers saying their goodbyes. 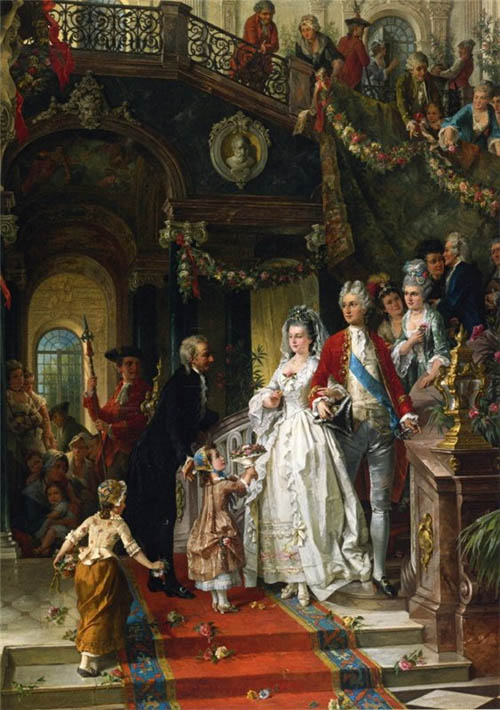 The Wedding Party is a portrait by Carl Herper that shows a bride and groom making their way down the stairs, followed by the wedding party. Flower girls are depicted scattering roses across the red carpet while the guests converse among themselves.

Another wedding portraiture by Edward Blair Leighton, this time with a twist. As the newlyweds exit the church, a soldier is seen beckoning to the groom calling him to prepare for battle. This draws surprised looks from the guests and the couple.