Blackening the bride and groom

The Scottish pre-wedding tradition of “Blackening the bride and groom” is one such intriguing custom.  Although this may appear totally disgusting to many; but holds a deep significance to the local population who has kept this tradition alive. 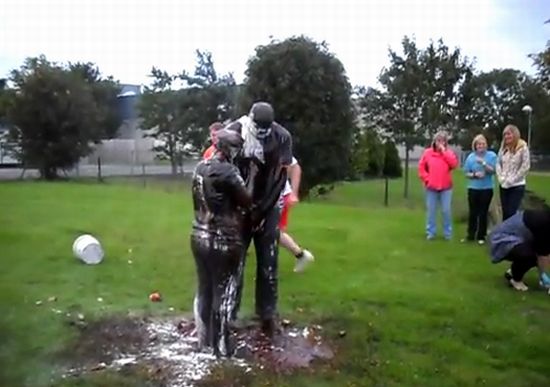 Like older cultures; Scotland too has a rich history and a vast pool of customs dating back to Celtic times. These strange wedding traditions make their weddings so unique and interesting. Although the usual Scottish staples like tartan wedding dress, kilts and bagpipes may be copies the world over; people who are not part of Scottish culture may find the local custom of Blackening a little hard on the stomach.

The pre-wedding tradition of the “Blackening of the bride or groom” has an uncertain history though the Scottish marriage rituals. None the less, it is one of the most fun albeit mucky traditions of the region. Shared by the whole community; the older custom sits in dire contrast to the alcohol and sex-themed hen nights and bachelor parties.

It allows everyone from a tight knit community to acknowledge the wedding of a couple. The community comes together to bestow some very important bits of wisdom that every married couple should know; before they wed through a very heavy and loaded metaphor.

What happens during the Blackening of the Bride/Groom?

Most people who have witnesses a blackening have described it as a ‘ritual hazing’. Nevertheless, most bride and grooms that endure the process are already aware of what’s in stock for them. Depending on the region; the friends, relatives, co-workers or anybody who is part of the wedding may take the bride or the groom or both as captives.

Sometimes the bride and groom are sat in a bathtub, atop a lorry or just paraded around the town in their sorry state. Their friends, relatives and other well-wishers follow them around making as much noise as possible. During this time, you will also see people banging drums, beating sticks, shouting, blowing whistles and creating as loud a din as they possibly can.

The couple is paraded through the streets of their town for hours. Sometimes people even come out their homes to “contribute” to the blackening with their own helpings of soot, feathers and what they have in hand. At times, the couple is tied to a tree though it is most common for the procession to end up in the sea. This adds to the seeming horror and humiliation of the ritual for the soon-to-be married couple.

When does this ritual take place?

The ritual takes places quite a few days in advance of the actual wedding for the couple to wash the gunk off and be presentable for their big day. Though you may find brides grinning and bearing it this ritual forcefully; grooms often end up having a lot of fun and prefer to bare their torsos to show off the anointing they got.

Celtic origins of this wedding tradition

Blackening or Reschtach, as a ritual has existed for quite a long time though no one knows the exact beginnings of the disgusting ritual. Many believe that Blackening is a corruption of the old pre-wedding traditions of feet and hair washing. The general noise-making aspect of the ritual would suggest that the ceremony has something to do with warding off evil spirits, bad luck and faeries. One of the probable explanations of the origin of blacking dates back to the medical era. This was the time when Celtics ruled the area. Word has it that this ritual might be symbolic of faerie abduction itself; this is because the people of that era believed in the wicked power of faeries

What does the ritual signify?

This ritual is limited to the ancient parts of rural Scotland. Not many people know about this Scottish pre-wedding tradition; although people who live in areas where it is followed; still perform it with a lot of enthusiasm. As a ritual, Blackenings symbolize the survival of Celtic traditions through the centuries of Christianization and even the survival of bits of the old tribal culture despite the wider acceptance that modern wedding practices have. In a world where brides and grooms are reluctant to follow local tradition and look to make their weddings appear more modern and individualized, ceremonies like Blackening remind us of the cultural roots of the institution of marriage.

Does this wedding tradition serve any practical purpose?

As brutal and psychologically scarring as the pre-wedding ceremony of Blackening of the bride and groom may appear, Scots believe that this kind of hazing and humiliation knocks the rosy notions of marriage out of a couple’s mind and better prepares them for facing the harsh realities of married life. The ritual is supposed to signify that a couple who can last through this jarring trial with humility can face any challenge that life may through their way later on.

A good lesson in humility; the main idea of Blackening is to help couples to understand that nothing can be as bad as this ritual. Nothing can be as bad as the very fact that this pre-wedding ritual covers then with gunk. On a deeper level, this is one of the rituals that brings couples together. This is because, no one else would want to get close to them. It also helps them to understand each other and help cements their bond.

Of course, the ritual also does a bang up job of rubbing the shine off of some of the more hardened and self-centered bridezillas who learn a valuable lesson in humility through the process.

Is the wedding tradition still alive?

Although this is one of the primitive wedding traditions and ceremonies, the heart of Scotland still follows the Blackening of the bride and groom. In the surrounding areas of the Aberdeenshire region, the bride goes through this ritual; while the region surrounding the Orkney Isles targets the groom.

Strangest wedding traditions/rituals from across the world

A few strange traditions all across the world are performed which is indeed quite difficult to explain. Such rituals are weird in the eyes of the beholder, yet a couple of these hold historical validation and significant meanings. Five of the strangest wedding rituals performed the world over include:

Today every average would-be groom like you will take a few months in finding the best engagement diamond ring for your better half. Before the 1900’s, people considered such rings as extravagant and luxurious,

During the latter part of the 1800’s, the diamond market flourished. This was due to the discovery of the diamond mines located in South Africa. It was after this discovery that the new influx of diamonds drove the price range down. .Today diamond rings have become a trend. After all, it is every girl’s best friend.

Queen Victoria was the woman who set the trend of the beautiful white wedding gown. People not only regarded it as a stylish pick, but even looked at it as a conservative fashion symbol. Prior to that, brides used to wear colorful wedding dresses or gowns.

However, the elegance of the white dress with orange blossoms worn by Queen Victoria was an instant fashion hit. It also became the inspiration for many women and soon transformed into the symbol of innocence, chastity and purity.

Groom and bride not seeing each other prior to the ceremony wedding tradition:

Most common superstition that it is indeed bad luck on the part of the groom in seeing the bride prior the wedding ceremony is an age-old belief. The very thought of the groom backing off before the ceremony was an embarrassing affair. This is why, the couples are separated before their wedding. Pairs today interpret this ritual in their individual way.

Freezing the top layer of a wedding cake:

We all know that each ceremony calls for a cake; however for newly wedded pairs who were already expecting a child before their first wedding anniversary did something a little different.

During the 1800’s the multi-tiered wedding cake was in trend. The brides would save up the leftover top layers of the wedding cake; the reason – so that they could use for the Christening of their child instead of getting another one. Today, many couples freeze their wedding cake as an emotional inclination.

For several women it may feel like an unusual and cruel punishment in showing up to same events and expected in wearing the same attire in the same style and colour. However, there is a cause behind the tradition, as a superstition initiated this complete matching thing.